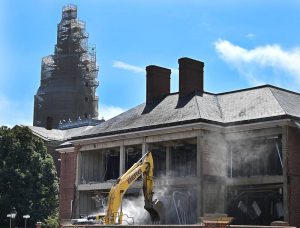 After 46 years, the Department of Legislative Services building on State Circle is coming down, to free up space for a new complex following state officials’ concerns about the current building’s deteriorating conditions and lack of space for the growing agency.

Department employees will be temporarily relocated through the General Assembly’s next two legislative sessions as crews hired through the Maryland Stadium Authority work on demolishing and reconstructing the facility, which housed over 300 staff. Employees are either teleworking or have relocated to other offices in buildings along the Lawyers Mall, according to Department of Legislative Services Executive Director Victoria L. Gruber.

The Maryland Stadium Authority has contracted with Baltimore-based Whiting-Turner Contracting Company to lead the project. This week, crews began demolishing the outer walls of the building located near the intersection of College Avenue and Bladen Street. Several mature trees on the plot were also removed.

Gruber said she expects demolition to be complete within the next two weeks. When the building is out of the way, crews will upgrade waterproofing for the leaking underground tunnels that connect several state legislature buildings.

The reconstruction of the Georgian Revival-style building is coordinated with several other face-lifts in downtown Annapolis. The city is upgrading its water and sewage systems, and traffic signals in the Church Circle, College Avenue and School Street areas. Meanwhile, the Department of General Services is rehabilitating other parts of the Lawyers Mall complex.

Planning for the overhaul of the legislative services building, originally completed in 1976, began years ago when the facility started showing signs of age, with old mechanical, electrical, plumbing and elevator equipment reaching the end of its life span, causing flooding, sewage pipe bursts and elevator outages as well as mold outbreaks.

The building’s foundation was cracking, Gruber said, and it would be cheaper in the long run to complete a full demolition than do periodic renovations and continue the asbestos mitigation the department had begun to undertake.

“The building is in bad shape; it’s been in bad shape for a while,” Lt. Gov. Boyd Rutherford said at a Board of Public Works meeting in June when the state approved an additional $52 million for the project, totaling $70 million so far for the project’s first stages.

On top of its aging equipment and mold, the old building couldn’t support the number of employees working in the department or further growth.

“We’ve expanded in a lot of different ways,” Gruber said, also noting that the additional space will provide room for facilities like lactation rooms and areas for visitors to sit down.

While the facility being demolished had two full above-ground stories and a smaller third story, the new facility will expand to include a full third story as well as a partial fourth. 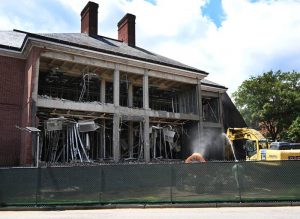