A Baltimore developer, along with city and state officials, held a groundbreaking ceremony Thursday morning for a new, multimillion-dollar housing development at the site of the former Madison Park North Apartments in West Baltimore.

The long-abandoned apartment complex was known as “murder mall” in recent years before being demolished about six years ago. The rectangular site, which is the size of a few city blocks, is located in the 800 block of West North Avenue, and speakers at the ceremony repeatedly described it as a “gateway” to West Baltimore that will be critical to the revitalization of one of the city’s main corridors.

“We’ve been patiently waiting for this project to start for almost eight years,” said David Bramble, co-founder of MCB Real Estate, which is leading the project. “I am sure many of us doubted that this deal would ever get started. And I have to be honest with you: There were many times when doubt tried to creep into my mind as well.”

According to a news release from MCB Real Estate, the first phase of development will build 120 new town homes as well as new roads and green space. The second phase is expected to bring a grocery store, retail space, 200 apartments and office space, said the news release. MLR Partners, of Baltimore, and Atapco Properties are also partners in the project.

Bramble said local leaders and community members kept encouraging him and offering help to get the development started, which he described as much-needed inspiration. Bramble, a West Baltimore native who lives nearby in Madison Park, gave a shoutout to his mother, who used to work in an office at the site and was in the audience Thursday.

“I used to come here often after school, so I know what this was. I lived it. This is personal for me,” Bramble said. “I can’t describe the feelings that I have as I see this site’s wonderful future about to unfold and what it means for all of us here in West Baltimore.”

As The Sun wrote in 2014, “The subsidized complex — dubbed by residents and even city officials as “Murder Mall” — has been the site of drug sales, stabbings and shootings in the years since its construction in the early 1970s.”

Bramble did not say how much money was being invested in the project and neither did the news release from his real estate firm, but Mayor Brandon Scott said in his remarks it was expected to be more than $100 million. 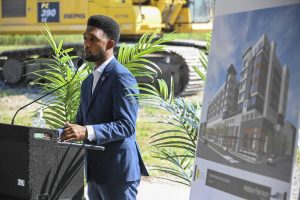 “Those of us from Baltimore — specifically those of us from West Baltimore — know how big of a deal this is,” Scott said before listing off his own memories of the location. “We know that North Avenue is our most crucial east-west connector that has for years been neglected as an anchor of Baltimore’s economic growth.”

Maryland’s secretary for housing, Kenneth Holt, said the Madison Park North Apartments were demolished as part of a 2016 city-state partnership called Project C.O.R.E, which dedicated about $100 million to demolish vacant buildings in Baltimore.

“Gov. [Hogan] toured Baltimore City after the riots and decided that with all the blight, the vacant housing, something needed to be done,” said Holt.

So far, about 5,200 vacant buildings in Baltimore have been demolished through Project C.O.R.E., which has led to new developments and park space, Holt said.

“It’s been completely transformational,” he said. “And I don’t know that it’s an exaggeration to say that it is in some ways the impetus for the marketplace to come to Maryland.”

Holt called Bramble courageous for taking on this project.

“There are starters, there are runners, and there are finishers, and David Bramble is finisher,” Holt said. “So you can thank him for what is about to rise from the ashes.”

An earlier version of this article incorrectly described the former Madison Park North Apartments. The Sun regrets the error.